Human(ish) in appearance, with ice blue hair and eyes and skin so pale you can clearly see the blue veins beneath, Mariner is apparently something he calls a “Genasi.” He has the ability to produce/control/manipulate ice (to at least some degree). In a sufficiently moist environment snowflakes will spontaneously appear on his hair or shoulders… or in his wake as he walks.

Mariner Antique is somewhat cryptic about his past, acknowledging that he is “quite old,” used to having a “whole planet to myself,” that he doesn’t usually like to travel, that his current form is “a disguise”… and that he is “hiding” from an “old man” who killed him in a dream.
More recently he has also mentioned that he spent some time “some thousands of years ago” “around the time of the Elemental Wars,” around R’Bak in the Sagittarian Subsector.
He asked Captain Sam and his crew for protection in the Amondiage System of the New Islands Subsector, where he was drifting (unprotected from the vacuum) amidst the wreckage of the local naval base. He said that he had been told to meet them here by “Father Time.” He informed them that he was fleeing from a great power, and that he simply didn’t want to be “anywhere that anyone might think to look for me.”
He drunkenly claimed to have once been a being composed of water, until he was “turned all hard and sharp and stabby” by someone named Freeze. He likewise bemoaned his failed relationship with said Freeze, noting that though he was “technically immortal” he would “return to Freeze” if he “died.” And that would apparently be a bad thing. 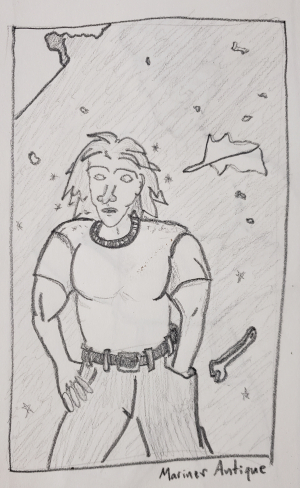