Eccentric Captain/Pilot of the Errant Cavalier

Unless he is forced into uniform, Samuel is usually dressed in an unbuttoned Hawaiian print shirt and a peach colored leotard (though since his promotion he often wears his uniform top rather than the Hawaiian print).

“Good Time” Vibes prides himself on being able to fly anything that can be flown. He’s better at some of these things, of course, and specializes in starships over 100 tons (such as the 250,000 ton Escort Tender he currently serves on).

Sam was born and raised in the asteroid belts of the Glisten System. The son of a starship mechanic and a waitress/restaurant manager. He mostly grew up in space-port hangars and sketchy startown drinking/dining establishments. He entered the Imperial Flight Academy as soon as he was eligible, so that he could explore the full diversity of the galaxy.

On the sprawling asteroid campuses of the Imperial Naval Academies of the Glisten Subsector Samuel developed a reputation as an advocate for non-human rights… and the moniker that has followed him ever since – “Good Times” (for his antics at the mixed-species parties and events).

Graduating from the Academy, Ensign Vibes transitioned into the Imperial Subsector Navy. He served two four-year terms, mostly as a chauffeur, piloting officers and dignitaries back and forth between starships, space-stations, and dirt-side facilities. During his second term he managed to gain the rank of Lieutenant (O3), and developed a long-term romantic relationship with a fellow crewman, the Aslan pilot RazorClaw Tho’Klah. The relationship ended amicably when Vibes mustered out of the navy, disillusioned by his prospects.

Once in civilian life, Sam tried his hand at commercial piloting, finding a job transporting freight between worlds on the borders of Imperial space. This career came to an abrupt end with the outbreak of the Fifth Frontier War, when the company he worked for lost most of their ships (and a large part of their employees) to pirates and raiders along their usual routes.

Deciding that this was no longer the life for him, Sam made his way back home to Glisten and took up his father’s trade, as a starship mechanic working at one of the innumerable spaceport hangars of bustling Glisten.

He might have lived the rest of his life that way, working on ships all day and hitting up the bustling alien-bars of Glisten at night, if it hadn’t been for the mass violence and death of the so-called “Glisten Virus.” At the time Sam thought that the “virus” had simply driven the Duchess and various other high-profile people murderously insane… now he knows that it was much, much worse.

The once bustling rock-port he lived and worked on had become a post-apocalyptic refugee-camp.
These were no longer “Good Times” in Glisten.

When he heard that his favorite reality-holovid stars, the Zaibon Huscarls, were recruiting for an expedition to Capital he jumped at the chance for a change an joined (back) up with the colonial naval force.

Lieutenant Vibes knew that he would be crossing the Great Rift when he signed up, but more than that he can now call himself a Rift-Pilot, having helped pilot the Task-Force across the gargantuan astrographic feature, through the Islands Subsectors to the core of the Imperium.

And it got weirder from there.

Apparently the Imperium was in civil-war, because the Emperor had been assassinated.
But then again he wasn’t… because the Rogues (as the Zaibon Huscarls turned out to call themselves) found the Emperor in a low berth on a bombed out world in the midst of the fighting…

“Good Times” Vibes somehow managed to get an Imperial knighthood when he served as a pilot during Emperor Strephon’s “Return” to his Vacation-Palace on the planet Usdiki.

And then, magically, Sam was right back in the Imperial Navy.

And time-travel of course. Sam jumped service branches again, flying multiple missions into a dimension called the “Time Stream.” The place is blue and freaky… Sam could pilot the ships even when their engines are powered down. (!?)

Liutenant Samual Vibes became a pilot for the Time Force! Which was (?) apparently a force that works for a group of immortals who live under a dome on a moon, and who fight time-travelling cyborgs out to steal the future.

On 220-1114 (shortly before his disappearance) Lord Fermi named Sam captain of the Agashaam Class Destroyer the Orkid Blade As captain, and with the freedom of an independent Task Force, Sam has proposed returning to the Spinward Marches… and getting away from all the freakish magic, spiders, and time-travel crap!

After discovering a creepy AI with it’s family of inbred humans drifting in space, went back to Usdiki and asked Vud for a bigger ship.

Assigned to the command of the 5,000 dton Rift Courier, the Errant Cavalier, which he used to re-cross the rift and return to the Spinward Marches. 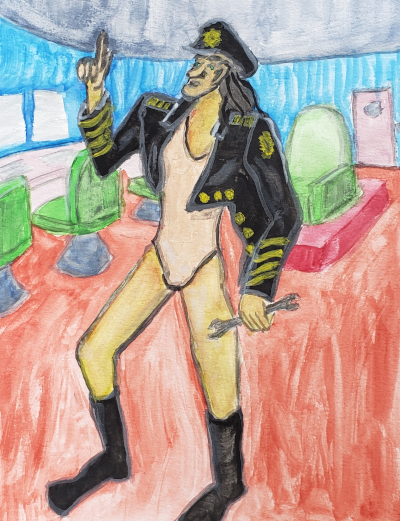